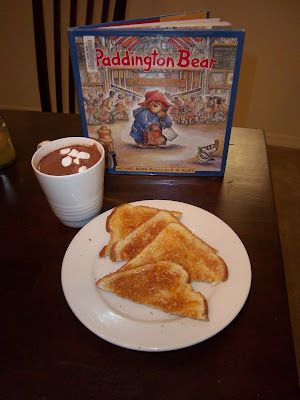 Oh, Paddington.  How lovable can a bear be?

According to the official website Paddington Bear was discovered by Michael Bond in 1956.  It was Christmas Eve, and there was one lonely little bear sitting alone on a shelf in a toy store.  Well, he couldn't leave him there, so he brought him home for his wife, and started writing stories about him.  Over the years, Mr. Bond has written a total of twelve books about Paddington, starting with Paddington Bear in 1958.

The stories, of course, don't feature Mr. Bond and his family; they feature Mr. and Mrs. Brown, who found the (fictional) bear in Paddington Station (hence his name) with a sign tied around his neck that said, "Please look after this bear. Thank you."  The sign, as we come to find out, was put there by his Aunt Lucy, who took care of him until she had to go into the Home for Retired Bears, and sent him on an adventure.  He traveled from his home in Darkest Peru, as a stowaway in a life boat, and ended up in London, where he met the Browns.

Paddington is a fun, lovable bear who is unfailingly polite.  He calls people Mr. and Mrs., and he never raises his voice; when angry, he simply fixes people with a hard stare, and they know that he is unhappy.  Of course, life with a bear is not always easy; he doesn't quite understand the way things are sometimes.  It might have been useful for him to know, for example, that while it is a lovely thing to go out to lunch, it is not generally acceptable to climb onto the table and get covered in cream cake and jam.  Or that, while it is fun to splash and play in the tub, it might be a better idea to pull the plug to drain the water, rather than bailing it out using your hat.

Paddington has a great deal of adventures while living with the Browns, and makes many friends over the years, including Mr. Gruber, who owned an antique shop and doled out wise advice over a mid-morning snack.  For this snack - their "elevenses" - Paddington and Mr. Gruber often had hot cocoa and sometimes marmalade sandwiches (because, as Paddington says, "bears like marmalade").  I decided I needed to make some Elevenses, too.

1) Toast your bread and spread it with butter.  Spread some marmalade on top.  (Alternately, you can skip the toasting and the butter and just have jelly-bread or marmalade sandwiches.)
2) Prepare your hot cocoa.
3) Sit down, relax, talk to a good friend, and enjoy.

When I think of Paddington, I can't help but be reminded of my bear Henri, who was found sitting alone in a toy wagon outside a small store, getting rained on.  Mom and I agreed - we had to take him home, and he's still having adventures with me.
I have to admit, I'd never had marmalade before, but it won't be my last time.  For those not in the know (and I know you exist, because I've already had people ask me "what's marmalade?"), marmalade is a jelly made with citrus fruit juice and peel.  I'm not sure why I'd never had it, since I love oranges, but it'll go on my list of yummy things I should eat more often.

Paddington Bear is a fantastic classic book that I haven't heard enough about lately.  I'm going to try to mix the classics in with new books more often, but as a lot of them don't have any food to speak of, the recipes might be more inspired-by than based-on.  Do you have a favorite classic book that you'd like to see posted?  Let me know in the comments, on the Facebook fan page, or by dropping me an email at KatCooksTheBooks@gmail.com.

Kat
I am a youth services librarian in Massachusetts. I love to read, and I love to cook, and I wanted to mix the two together. So, here I am, cooking the books.